Well, I didn’t really have to sneak, because the city is no longer forbidden to ordinary citizens without an Emperor living there. 😛 Carrie and I continued in our journey of visiting places without doing much research ahead of time, and we had an enjoyable afternoon walking through the grounds.

The best way I found to get there is to take the Beijing subway to Tian’men Square, which is right next to the Forbidden City. You can’t get much better than paying RMB 2 (roughly 30 cents) for a subway ticket.  It was good to go there during the off season because there were quite a lot of people there today, and I can’t even imagine what it would be like on a weekend in summer. As we walked in, we found a guide right away to show us through the massive complex which is about a kilometer from one gate to another.  Since the layout is pretty straight forward, I suppose we could have gone without a guide (or a self guided recording), but then we would have missed all the history as we walked through.  You could conceivably spend an entire day here because there are multiple halls filled with artifacts from different emperors. I am not much of a museum person, so we only went into a few of these places, and instead focused on admiring the architecture of the different buildings.

The Forbidden City is the largest palace compound in the world, and it was used to house the Emperor, and even had an office, gardens, and soldiers quarters at the entrance.  There are a few large courtyards that were used for ceremonies. The buildings are painted gold throughout because that was  the color used for the emperor.

The roofs of the buildings are marked with animal statues, and the double roofs on the buildings were used for warmth.  The second roof provided more insulation for the buildings.  I can imagine it would get quite cold in the winter. I was lucky to have a clear blue sky day when I visited today, especially considering the bad weather Beijing was having last weekend.

As with every large tourist destination, there are the traditional things to see as well as the opportunities to be hilariously touristy, thanks to enterprising individuals.  If I had wanted to, I could have dressed up in a costume to walk through the area during my tour. 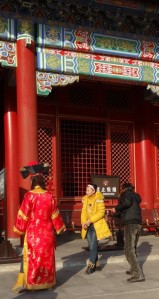 The advantage of having a tour guide who kept us moving is that we were able to avoid the many vendors selling refreshments and those offering to make us a DVD of us “flying” over the city (are movies of people flying over the Forbidden City a thing?). Of course, it turned out our tour guide had her own agenda for us.  We walked into a very low trafficked area at one point, and she explained it was an office for the nephew of the last Emperor.  We got to walk in and there were a few rooms of gorgeous antique pottery. After a few minutes, the Emperor’s nephew himself came in.  He is actually a renowned artist and calligrapher, and offers calligraphy to raise money for restoration of the Forbidden City.  Although we hadn’t budgeted to buy scrolls (which run between 100 and 250 USD depending on size), it was interesting to look at a few samples.  Meeting an Emperor’s nephew was also a great opportunity for me to use some of my sparse Chinese, since I can in fact say “nice to meet you” in Mandarin.

Our guide, Lily, outside the office.

After that, we continued through the rest of the complex, which ends with the Emperor’s garden.  The trees there are old, some even 300 years old. I liked the garden the best because it was really relaxing. I suppose if I ran a country I’d like a nice quiet place to walk through.  There was even a small building with a roof for playing chess. 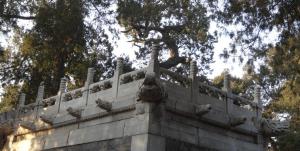 Our tour concluded with the garden where we said goodbye to our tour guide.  There isn’t the option to walk through the gate we entered through, so we had to go out the entrance by the garden, where apparently all the rickshaw drivers hang out just to get tourists to take them up on their transport.  It was one of the few times here (so far) where I was completely bombarded with all sorts of people trying to sell me tours and approaching me to take their vehicles.  It was somewhat frustrating, and Carrie and I just kept walking- it’s not like we can take a rickshaw half way across town.  Unfortunately the area behind the Forbidden City is sort of a weird layout, and it took us almost 30 minutes to find a cab.  Next time I go there I will have to figure out the quickest way to get back to a metro stop instead.  Still, it was really interesting to spend a few hours wandering through the area and seeing the architecture, and learning some of the history of China. If you’re planning on going to the Forbidden City, wear walking shoes and also decide how much time you want to devote to the different sections.  The entrance fee is 40 RMB in the winter and 60 at other times, so it’s quite reasonably priced if you choose to walk through on your own.  The signs for the artifacts in the museums are in English as well as Chinese, so you can still learn a lot from them. Behind the garden are two famous parks to visit if you have extra time afterwards. For me, it’s one more UNESCO world heritage site visited!