Just to give you some context, I was one of those kids when I was little that was a pretty picky eater (true story: I convinced myself I hated water chest nuts, but one day my sister gave some  to me and said they were white carrots and I ate them. Go figure). Now that I live in foreign countries, I’ve had to leave that aside and be open to what I eat. In Peru it wasn’t as difficult because at least I could read the menus. In Beijing it’s a little different– I can recognize probably ten Chinese characters total, so when I go to a restaurant, I have to hope the menu either has English translations or pictures just so I can order.  This isn’t too much of a problem in Beijing, but when I went to Harbin, this was quite a challenge. Our hotel’s restaurant had no pictures, and so I ordered dumplings because that was the only food word I could think of (mmmm jaozi, you were a delicious savior that night).

Although it can be sort of intimidating to go to a restaurant unsure of how you’ll even manage to order, what comes to the table ultimately makes it all worth it! I have had some of the best food I’ve ever tasted here, and Chinese food from China leaves what we call Chinese food in America in the dust! There is also a huge variety of what you can find, between restaurants with international twists and specialty foods from a distinct region or town in China.  I’d like to outline a few of my favorites so far.

For anyone unsure about what they want to eat, dumplings (or jaozi) are definite way to go. They’re pretty easy to eat, even if you aren’t that proficient with chopsticks, and they come in practically unlimited flavors and fillings, so if you have some dietary restrictions, you should be able to find some dumplings anywhere.

My favorite so far have to be the dumplings at this little restaurant in Chaoyang near the Liangmaqiao subway stop, Bao Yuan.  When you order several different kinds of dumplings, they color  them so you can tell the flavors apart! I know, it sounds sort of weird (purple dumplings, ew?). It’s just that they color the dough a little bit, and I think it looks pretty cute.   They also have a large menu of dumplings, as well as other dishes, so it’s a great lunch or dinner place to go to.   One of my favorite non-dumpling dishes of theirs is this sautéed eggplant which comes topped with cilantro, garlic, chili pepper, and crunchy noodle. If you mix all the toppings together, it makes for a really delicious mix of flavors. I’ve also never had eggplant the way I’ve had it here, where it’s incredibly soft. Anyone who doesn’t like eggplant just hasn’t had it cooked like this!

I should have taken a picture of this eggplant dish before it was all mixed up, as it looks a lot better that way, but hopefully you still get the idea anyway. 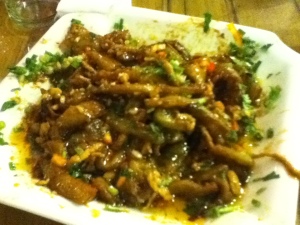 As much as I love dumplings though, the cuisine here is far more diverse than that, and it’s been great to go to some small restaurants that specialize in regional foods. I went to have some really spicy food at a Sichaun restaurant near the Westin Chaoyang, which certainly helped clear my sinuses during the allergy-inducing weather lately. 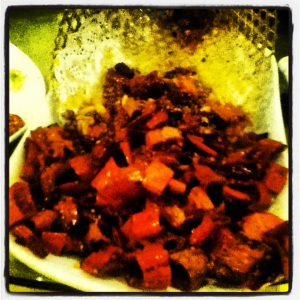 fried chicken and chili dish from a Sichuan restaurant.

I also tried some food from Xinjian, an autonomous region in northwest China heavily populated by the Uyghur ethnic group, among others.  This food was fascinating because the people in this region are traditionally Muslim, and I noticed a lot of influence from neighboring countries in the cuisine. I chose to have a side of yogurt with my meal, which was  great for balancing out some of the spicier dishes our group ordered. The lamb skewers we had were also a big hit, and we ended up ordering a second round for the table.   At Chinese restaurants in general, most dishes are served family style, and on larger tables they’re put on lazy susans so you can spin it around to grab some of any dish.  I like this format because it doesn’t commit you to eating any one thing (especially if you have no idea what it is and just ordered based off a picture). It’s also a plus if you go with a group, and you can just decide to eat what everyone else orders, which works out perfectly for me, since there’s usually at least one Mandarin speaker at the table! 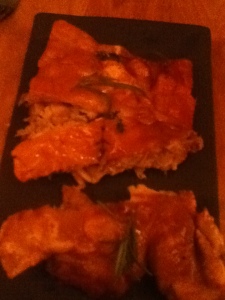 Another great thing about Beijing is that there are plenty of restaurants if you don’t like Chinese food (hey, we all need some variety now and then).  There’s a fairly new part of Beijing called SanLitTun which is a huge conglomerate of modern shopping centers and international eateries. My favorite section so far is the Nali patio, which is reminiscent of an indoor/outdoor space typical of Spanish housing compounds.  Inside is a whole array of restaurants, including several Spanish restaurants. I like these because even if I don’t know the Chinese or the English doesn’t make sense, I can figure out what I’m ordering from the Spanish on the menu! This past week I went to Niajo for their monthly wine and food tasting night. The theme was Segovia, and they featured a different wine from the region with each course. The food was amazing, and my friend and I ate every single thing they put on our plates.  I will be keeping an eye out for the next tasting night, as it really was a treat to find some authentic Spanish food so far from Spain!

There’s a whole variety of food here if you’re willing to look for it, and sometimes the best way to find restaurants is to just walk around until you like the look of something. I’m glad I have such a long time here that I can go exploring and see what different types of cuisine this place has to offer. Each meal is an adventure for the palate waiting to be  tasted! 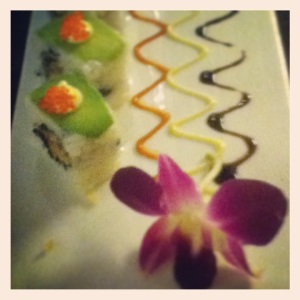 Gorgeous sushi rolls at a Japanese restaurant in Chaoyang district.