I spent the last week in Shenyang, enjoying some more cold northern China weather, and decided to get outside the city a bit to see what’s out there! About an hour away is a good mountain for winter sports, but since I’ve already seen the Harbin International Ice Festival, I decided to go see a different nearby site instead- the water caves at the Benxi Shuidong National Park.  These caves actually have a river running through them, so you can take boat tour to see the different cave formations (in different colored lighting of course).  If you ever find yourself in Liaoning, China, it’s worth a stop to go see.  Because the park has a lot to offer as far as hiking trails, I suggest going a little later in the year than I did.  The caves of course are accessible year round since they stay about the same temperature, but I wasn’t very tempted to walk around outside considering all the snow and ice covering the ground!

There is a small lake as you walk to the entrance of the caves, as well as a small museum.  This is why I think it would be a great spring or summer mini vacation, since there is actually quite a lot to see if it’s not all covered in snow!

The park is about an hour and a half from Shenyang if you drive there directly, but you can also take a bus to the city of Benxi and then take a taxi or tourist bus to the park as well (total two hours).  My taxi driver turned park navigator snapped a photo of me outside the cave entrance: 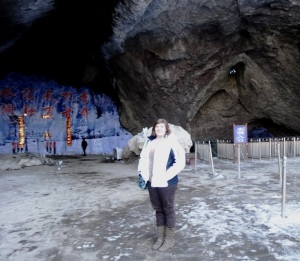 Luckily the visit to the caves required no advance planning on my part- upon entering the park I paid a fee (150 RMB) that granted me entry to the different sites.  As I entered the cave, I just joined the line and hopped in a boat!

The cave itself was really impressive, as they had installed lights to show many of the different formations.  I enjoyed the colored lights, but I think some people might want to see normal lights to get a sense of what the stalagmites really look like.

What is it like to take a boat tour through a cave? I planned ahead and brought my GoPro Hero 2 along on my journey with me, and took a video of some of my journey:

I’ll post a more detailed entry later on what it was like in the city of Shenyang, but I hope you liked seeing the water caves! Next time you go to a park, don’t forget to love the nature there, even if it’s covered in snow.